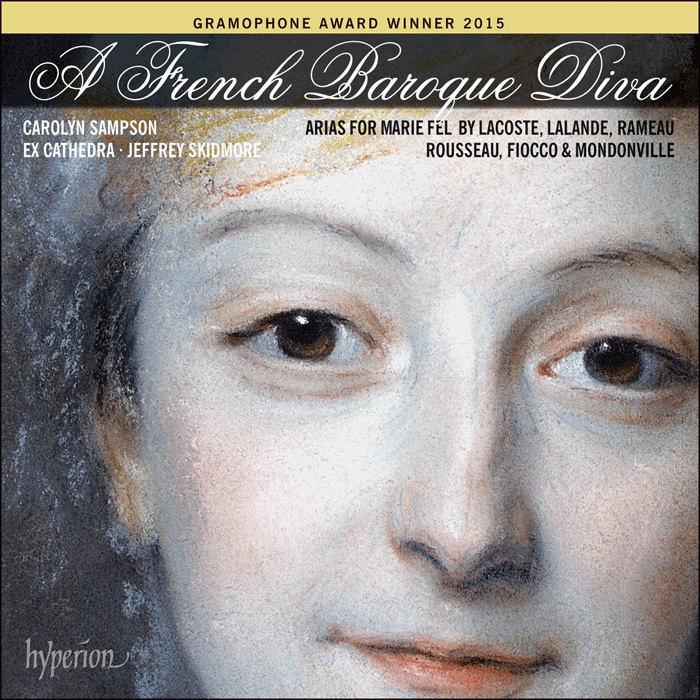 Carolyn Sampson and Ex Cathedra perform the rich, fulsome music of the French Baroque. This album showcases the works written for the premiere soprano of the day, Marie Fel. Voltaire called her his ‘adorable nightingale’. For d’Aquin, she was an enchanted being.

Marie Fel held an entire generation spellbound at the Paris Opéra and at Louis XV’s court during one of the most glorious periods of French music. With a voice described as ‘pure, charming, silvery’ (La Borde), ‘touching and sublime’ (Grimm) and ‘always lovely, always seductive’ (d’Aquin), she inspired some of Jean-Philippe Rameau’s finest music and introduced a whole new level of virtuosity and expression into the French singing tradition. Her long, triumphant career is traced through this fascinating recording.

“This is a brilliantly planned and executed, musically illustrated biography of Marie Fel, one of the great 18th-century divas and muse of Rameau, admired by the Philosophes and adored by Paris audiences … this is a programme that pleases as much today as it did in hers, guided by Graham Sadler’s beautifully crafted booklet-notes … Carolyn Sampson, in superb form, is joined here by the choir of Ex Cathedra, who sing with precision and clarity of articulation in a lovely bright acoustic … the longer we listen to Sampson’s voice, the more she seems to inhabit the aura of Fel, clearly a skilled and charismatic yet deeply affecting performer.” Gramophone Award Winner 2015.

“This extremely well researched recording is captivating. Based on repertoire performed by Marie Fel, the ‘Jenny Lind’ of the court of Louis XV, it ranges from the restrained elegance of de Lalande to the Italianate excitement of Mondonville… In standing in for Fel, Carolyn Sampson is quite remarkable. She has the capacity to soften the vocal line with carefully controlled vibrato, but also deploys tone of crystalline clarity. There are many highlights, but the characteristically colourful excerpt from Mondonville’s Daphnis et Alcimadure is particularly delightful as is Rameau’s La lyre enchantée” (BBC Music Magazine)
Performance
Recording

“Celebrating the work of a singer described by Voltaire as an ‘adorable nightingale’ is a terrific idea for a recording, especially when it has been prepared with such care and performed so stylishly … from the start, it’s clear that Carolyn Sampson is an ideal exponent, stylishly supported by Ex Cathedra and its period-instrument orchestra … this is a lovely disc, a most attractive programme supported by Graham Sadler’s illuminating and extremely interesting note (in a booklet that also includes complete texts and translations). The sound is up to Hyperion’s usual standard, capturing Sampson’s voice extremely well, in a natural balance. The whole production has provided me with hours of pleasure” International Record Review

“In this exquisite release from Soprano Carolyn Sampson and Ex Cathedra, Sampson steps into Fel’s dainty silk slippers and guides us through a life in music, one baroque bonbon at a time. Sacred and secular repertoire co-exist happily here in works by Rameau, Mondonville, Lalande and even philosopher Jean-Jacques Rousseau – moonlighting as a composer. The names might not all be familiar, but the idiom is instantly recognisable and attractive: sensuous, fluttering ornaments and coyly unfolding melodies… a vivid historical re-enactment that’s anything but dusty.” www.sinfinimusic.com

“If 73 minutes of French Baroque soprano arias might seem a daunting prospect with a whole lot of twittering trills and appoggiaturas, do not be fazed as this program has been cleverly chosen with sacred works, including an Italianate Laudate pueri by Fiocco, choral contributions and a few dance numbers providing a varied sequence easily digested in one sitting. The sacred numbers from De Lalande are especially noteworthy with the Tu Ad Liberandum from his Te Deum a highlight of the recital. Sampson’s control of vibrato and ornament spins a silver thread of breathtaking beauty” limelightmagazine.com.au